Not a theory of everything, but a limited model of consciousness development

Among the theories of everything, like Lisi’s E8 (an interrelated 248-dimensional symmetrical object) and the attempt to unite quantum, relativity and string theory, there are many that focus on the development of consciousness, either as an emergent phenomenon (materialistic) or as part of the wider purpose and direction (idealistic) of the universe and creation. The notion, that we as humans are (so far) the ultimate form of consciousness, an anthropocentric view of reality, is quite common in these theories, as is the idea that consciousness is developing, that there is progress. Of course thermodynamic and entropic considerations tell us otherwise, unless we assume there are extradimensional (outside normal space-time) space/fields/realities, in a view that I would call metadimensional.

Spiral Dynamics (concepts developed in 1970 by Dr. Clare Graves, further developed and named in the book by Don Beck & Cowan 1996, also Beck 2006, Ooten 2010) and also prominently popping up in Ken Wilber’s popular but not really original Theory of Everything (2000) uses a view of the evolution of human consciousness in history and during our life, also allowing a more multi-dimensional understanding of the development in our lifetime, how we go through various phases or levels of consciousness. This combined with the typology provided in the enneagram (Ichazo, Naranjo, Gurdjieff) and how these types develop as we grow more “aware” of our “selves” and “personalities” is an interesting approach to understand how we grow in a kind of 9 x 9 matrix of types and consciousness levels. It lacks the differentiation between the multiple enneagram types or subpersonalities (masks) in most of us (I think Down’s syndrome has but one type and no masks) that would explain the inner conflicts that result in life’s lessons. The idea that individuals (but also larger organizations) might have more (sub)-personalities and a basic (higher self/inner child) mode that un- or subconsciously plays a role too is elaborated in other articles and in the e-book about ritual and magic.

Working with levels of consciousness at each enneagram point however does helps to asses progression and maturation in inner development and behavior. It has some similarity to what Don Riso already described as enneagram development levels, but there is a touch of Maslow hierarchy too.

The levels are named after colors, and start with Beige for the first level of existence,  concerned with instinctual drives of survival of the species and immediate gratification of the very basic survival needs of food, water, safety, and sex. Interestingly it is also described as the primary level of operation in newborn infants, late stage Alzheimer’s patients, and after extreme trauma and shock.

The Purple level is magical and animistic, about keeping the spirits happy, the tribe safe, and ensuring continued gratification of basic needs, but within a group and tribal setting.

The Red level is impulsive, hedonistic, control driven and egocentric, fighting to survive. The individual needs outweigh the needs of the group.

At the Blue level the individual becomes concerned with direction, the world being divine, controlled and purposeful, but also a sense of guilt arises and the afterlife starts to play a role, doing good and sacrifice, sometimes fundamentalistic.

Orange is where the ego becomes fully individuated in a world view where independence, logic, competition, success, optimism and scientific progress gain value. Orange level thinking rationalizes the means to reach the ends.

The Green level is where the group, inner peace, consensus and unity are valued over materialism. This level becomes lost in self-contemplation and idealism and uses massive resources with little production.

The Yellow level  is when the individual realizes that equally distributing resources among all people and expecting that all humans are equally good and loving creates more problems than it solves. By acceptance of all people for who they are, chaos is seen as part of the natural order and and imperative for change. The individual transcends self-centered, instinctual and emotional drives.

The Turquoise level order is understood within the chaos of the universe, and spirituality and physics are combined for a deeper understanding of the universe. Paradox is embraced and known as essential.

I use here the Ooten graphs, as they nicely illustrate the conjunction matrix of enneagram and spiral dynamics

Descriptive Phrases of Types and Levels of Consciousness 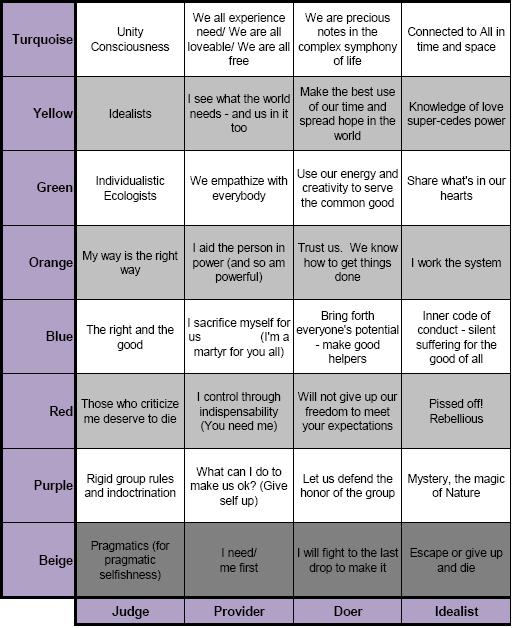 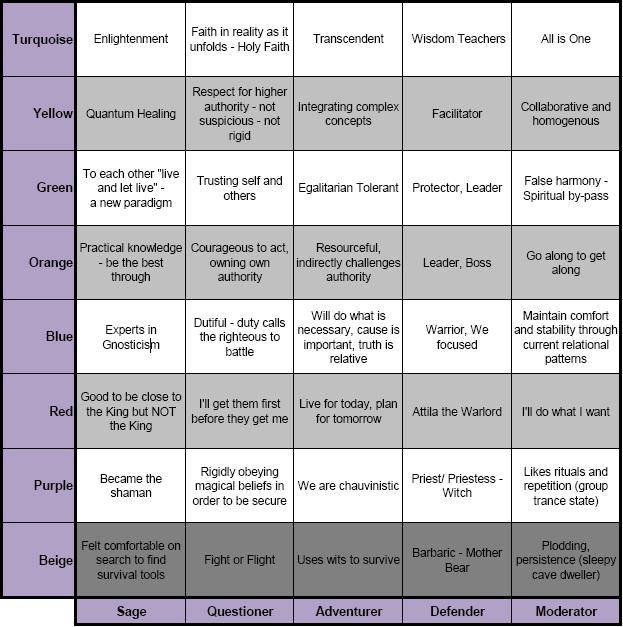 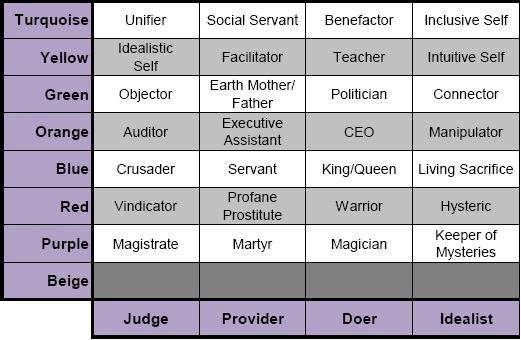 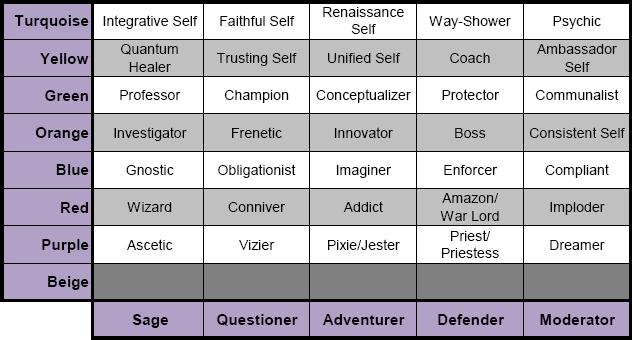