Trump and the Western identity crisis

With Trump as USA president, populist movements on the rise and a general fear for terrorists, economic and ecological disaster it makes sense to speculate about the underlying mechanism. I hypothesize that the root of the problem is the decay of the Western and more specifically the American identity. Who and what are we, once the ruling culture of the world, but now slipping into chaos, polarized us-them positions, xenophobic sentiments, with the media feeding our fears and making the diversity manifest and threatening. Trump’s success had, apart from his obviously compelling personality dictatorial status, much to do with the transparency internet has induced in our world, magnifying the diversities and allowing riotous feedback oscillations in the (social) media and the popular mind. The mitigating effect of time and distance has dissolved, everything is happening in overdrive, fast, changes and political shifts occur in hours like in the night that Trump won the election, markets collapse in seconds.

These are no longer rational times, it’s no longer the economy or even the factual reality that matters, it’s the gut and our emotional needs that drive us, and make us look for the savior or tyrant. It has happened before, and not always with a negative outcome, sometimes we need such a reality check.

Look at what has been the distinct message of the Western world (and shifting from Western Europe to Northern America) in the past century: “we are the best, the only, the ruling cultural and political model, follow our lead and you will be successful, wealthy and happy”. Democracy, human rights, neo-liberalism, free trade, virtual credit: these are the golden keys, embrace them or you will perish. This message has been forced upon the world, by dollar, war and media and the alternatives had no chance. The ‘American Dream’ is the only dream, the rest is primitive, outdated, barbarous, unhealthy.  This has become the deep identity of the Western culture, we are superior, better, richer and guess what, our economists, sociologists and politicians will prove it too, for science is at our beck and call since we pay for it and imprisoned it in the material paradigm. few noticed, that this overblown collective ego was just hiding a growing collective and individual inferiority complex. Bigger cars, bigger screens, more pixels and bandwidth, does it makes us happier? Materialism has become a virus, and the African people trying to swim across are infected, but they are NOT what made and still makes rural Africa a stable and intimately happy society. 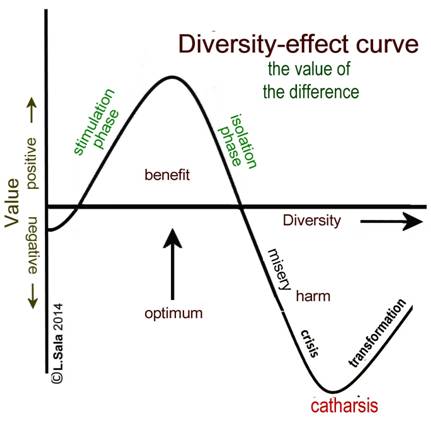 But what happened? The world didn’t buy in, the ‘primitive’ nations did not only catch up but stuck to their paradigms, religions and hierarchies, and war after war failed to convert them. The Western paradigm got isolated and worse, started to crack at the core. The identity field that connects the group mind with the individual mind started to breach; the factures spread, people started to feel disconnected from each other, from their ideals, from their identity. The information revolution and internet was feeding this dissociation, even as it was and is perceived as offering a new (virtual) identity and autonomy. But the autonomous zone of Cyberspace turns out to be an entropic flattener of identity. Privacy dissolves, the freedom to be different, to make mistakes, to learn and grow evaporates. Life speeded up, multi-tasking, the rat race, winner takes all, the need for masks to hide our true identity: we are beginning to see how all this does not bring happiness, togetherness, and the mistaken exchange of freedom for security makes things worse.

The manifest and thus perceived diversity is pushing us into chaos, independent from whether there is more or less income, culture, education, social mobility and spiritual diversity, the facts don’t matter, emotions do. Too much (perceived) diversity leads to chaos and then, maybe, to a catharsis. The paradox here is that those pointing at the diversity, like Piketty, Sedlacek, the Occupy movement and even Michael Moore, have been instrumental in amplifying the perceived diversity. And now we see the us-and-them polarization growing, the city versus the rural, the fundamentalists versus the secularists, the alternativos versus the orthodoxy, the left versus the right. The bridges between them, the shared interest is giving in to polarized debate, unmanageable political constellations, even violence and war.

So, here we have a crisis, maybe just starting, maybe peaking, but at the root of it is an identity crisis. It doesn’t help denying there is, the only way to deal with it is to understand better how identity, diversity, autonomy and transformation are fundamental issues, to recognize how we messed up, how we have taken away the (mostly immaterial) pillars of self confidence and confidence.  Here the crisis at the society level is clearly related and interacting with our personal crisis, our looking for meaning, the loss of real connectedness to real people, the invasion of virtuality by way of the media and social media. Who we are is more and more externalized, our profile on Facebook or Google is more important than what we think we are. Our chances in the job market, concerning our credit ratings and thus our outlook on life are more and more becoming ‘digital’ and based on what the system (the profiling software used by banks, government and net-platforms) decides who we are.

Identity, what we are, is a complex issue, we have different identity faces, there is a core identity of being, usually not well understood or realized but essential, and there are assumed identities, what we believe we are (and there can be multiple identities here), then there is the shown identity, the mask(s) we consciously and unconsciously show to the world, but then there is the outside, where the identity is perceived but also convoluted and maybe very different from the inner identities, due to projection, intuition and speculation. The identity crisis of the West has to be analyzed at all these levels, we have to break through the surface, try to understand who we really are, at the collective, group, gender, national and individual level. Identity is a core dimension, and resonates at all levels. What happens at one level influences all other identity levels. A crisis at one level works out in other levels, so we cannot really separate the individual and the society crisis we are in.

This crisis and understanding might lead to major shifts in the Western paradigm and so what? The world is changing, in dealing with ecological and energy crises, automation and internet transparency we are due for some major repositioning anyway. With free energy on the horizon (wind, solar, thermal will replace oil and help us deal with climate change) we need to look into what we really are, half-conscious and belligerent ravaging animals or responsible human beings able to find sustainable solutions to bridge the individual and the communal.

So let’s look at what Trump really is, a symbol of our need to change, an opportunity to redefine our individual and communal identity. He is the confrontation, but look at the paradox. His inauguration has released such great solidarity amongst women. They united seemingly against his macho theatre, but very wisely transformed that in a call for solidarity with all minorities, a call for love we have not heard for a long time in the world. Maybe he is, or just cunningly plays, the devil we need to see the light!